I have not written a blog post in months! Possibly because I have been busy or perhaps procrastination had more to do with it. Oh well. This morning I read in the news about Pakistan’s Minorities Minister Shahbaz Bhatti who was shot dead in Islamabad. Mr Bhatti was assassinated for his fight for a reform to blasphemy laws in Pakistan.

This news saddened me greatly firstly because he is human like every one of us who has been killed unjustly and also because I had heard him at a conference about 3 years ago. It was clear he was passionate about his cause and was willing to give his life for it. We all as well as himself knew he would some day. However we did not know when. I definitely hoped it would not be so soon.

This event got me thinking about 2 things:

Could this have been avoided? From the BBC News report, “he had complained about not being given extra protection in spite of the obvious threats he faced”. How come he was not adequately protected? Then I wondered about him and those around him – were they praying for his safety and wellbeing knowing the dangers he faced daily? When can you say you have prayed enough anyway? I know that God answers prayers and it is by His grace that we live on. Perhaps his death is all in the plan…I only know in part but I prefer people alive and fighting on rather than as martyrs. This is my preference, God knows best. Just some of the questions I had racing through my mind.

Secondly I asked myself “are you so passionate about anything, enough to be willing to give your life for it?” I believe this is passion in its highest form. Should we even develop and embrace this sort of passion? Christ was passionate about people. His love for man cost Him His life.

Where is my passion? Where is yours? I believe passion defines us and adds colour to our lives. It gives us something to live and if possible die for. This may sound somewhat morbid but the truth is this: passion births results. Every dream, value, goal and cause requires zeal, seriousness, focus and some form of sacrifice. Without these, they will eventually die. I believe Mr Bhatti was dead (in the sense of it) before he was actually killed. I doubt he would have continued in his fight had he not resolved to lay fear, doubt, complacency and the other things that usually keep us from moving toward our desired goals and expectations. In his own words (I paraphrase), he was ready to die for his cause – for the lives of minority faiths in his country.

I pray that God will provide comfort for the family and friends of Mr Bhatti. I hope this would bring about the change he gave his life for. May the Prince of peace dwell in all of our hearts. 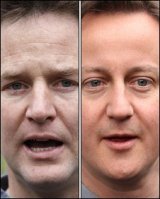 So on May 6th we made our choices and whilst we await the outcome of discussions between the Conservatives and the Liberal Democrats, it appears we are going to have a new government. During the election campaign David Cameron said his party (The Conservative Party) is best placed to lead Britain to recovery. He said a Conservative Government will get the economy moving, mend our broken society and fix our political system. Their ‘contract’ in a nutshell is as follows: